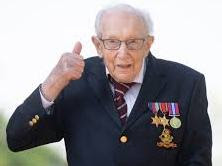 Most tragedies reveal characters who might otherwise have remained unknown. COVID-19 is no exception.

Captain Tom Moore is one such. He offered to walk around his garden, with his Zimmer Frame, to raise money for the NHS (The UK's free health system).

I hear on the news this morning that he's been upgraded to 'Honorary Colonel'.