A change in UK politics. 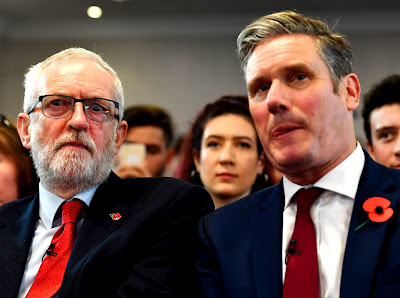 Whilst the nation's press and TV have been concentrating on other matters, in a smoke filled room (somewhere in Islington) the Labour Party have just elected a new 'leader'.

In a country where there is now only one viable political party, one tends to forget the 'also rans'. Can anyone name the leader of the Lib Dems, or UKIP, or the Social Democrats, or even the Greens? Probably not.

However, in amongst all these smaller parties is the Labour Party (remember them?), who have recently exchanged their Marxist leader for a North London, Champagne Socialist, of the Blair ilk.

His name is Sir Keir Starmer; this Knight of the Realm is an ex human rights Lawyer/Barrister. (photo: Starmer right, Corbyn left)

Of course, as is normal with the Labour Party, some are not happy that their strict Marxist credentials look like being camouflaged in order to make the party more electable, and there will no doubt be many casualties as Starmer clears his benches of the more radical voices.

On the other hand he has promised the Corbynite Rebecca Long-Bailey the job as Shadow Education Secretary, and dear old Ed Miliband the job of Shadow Business Secretary (remember him?), David Lammy gets the Justice job (heaven help us), Lisa Nandy becomes Shadow Foreign Secretary, Emily Thornberry becomes Shadow Secretary for International Trade, and Valerie Vaz (sister of naughty Keith) becomes the Shadow Leader of the House. It must be said that poor old Starmer has a rough bunch to choose from for his Shadow Cabinet.

It all makes Boris look like an intellectual God amongst a congregation of angry school children.

Strangely, the only opposition Leader with any clout whatsoever is the highly unpleasant Scottish Nationalist Party's representative Ian Blackford. He may be misguided in his politics, but he's often a worthy opponent, and he speaks coherently.

When Parliament returns to its intended form, it'll be interesting to see how Starmer acts. As an ex-Barrister he should be used to logical debate, and hopefully we'll have no more letters from Doris of Darlington, or from Clarice of Cleethorpes; he'll be far more likely to fire from the hip.