The question you've always (or never) asked; who was St Pancras? 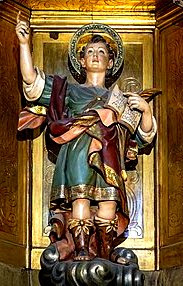 St Pancras is (I think) the only Saint to be named after a Railway Station.

Poor chap; he didn't have much luck in life. His mother died in childbirth, and his father died when he was just 8 years old.

The young Pancras then went to live in Rome with an uncle, and (bizarrely) turned to Christianity.

Because he refused to renounce his new faith, he was beheaded on 12th May 303 at the age of 14; and was later declared to be a 'Saint'.

I don't think he performed any miracles, or changed peoples lives particularly; he was simply punished for his beliefs, and that was enough for sainthood.

Not much of a life really.