What an asset to British politics. 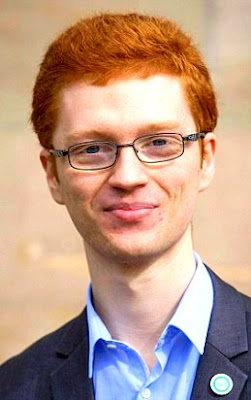 This charming, spotty, geek, is a Scottish MSP.

He is 24 year old Ross Greer, and is the Europe Spokesman for the Scottish Green Party. He failed to complete his degree at some little known Scottish University, and probably, having not found any mainstream party to adopt him, managed to convince the piss-poor Greens to take him on.

In a recent 'tweet', he described Sir Winston Churchill as a 'White Supremacist Mass Murderer'. Well, let me tell you Greer, that Churchill was one of the greatest British Prime Ministers of all time, and the likes of you are not fit to wipe his bottom.

If anyone should spot this person, out and about, would you please kick his backside (very hard) on my behalf. I would be most grateful.

Twenty fours years old, and the little twerp thinks he knows better than the rest of the world. I despair!

I suggest he stays north of the border, until the anger dies down.