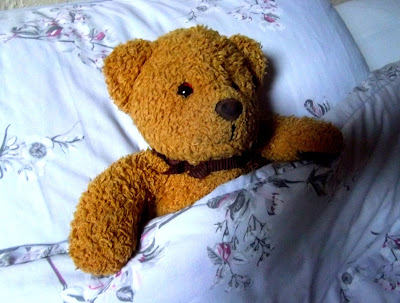 Above is our House Bear named Monty (named well before we had our Labrador of same name).

If any children should come to stay WITHOUT their own Bear, they are offered Monty to keep them company during their stay.

As a child I didn't have a Bear; instead I had a 'soldier doll' named Alphonse. He stood nearly 2 ft tall, and was dressed in Khaki-coloured army fatigues. He was a hard 'composition' doll, so not really the type you'd take to bed with you; he was won by my mother at a Red Cross Ball in London. I still have him back in England, and other than my 'spoon and pusher' he's the one thing that's stayed with me throughout my life.

My own children naturally had their own Bears. My oldest son had Bryn, my daughter had Mrs Pins, and my youngest had Harry (you might remember Harry's Passport). The first two were named by the children; Harry came ready named.

I think all children should have a Bear. Not some silly dayglo Disney character Bear that speaks in Japanese, but a pukka Teddy Bear. They, and their owners, soon become inseparable, and as much as they like to pretend that they no longer care for their childhood Bears; let me assure you that they do!

Thinking of what to buy for a small child? Buy a classic Bear.

If you still have your childhood Bear; put up a picture on your page!