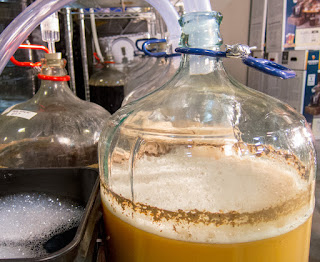 An English friend of mine was telling me recently that back at his home in London he always makes his own beer, and has a brew permanently on the go. It reminded me of the following.

When I was at school, at the end of each Trinity Term (Summer), we boys would host a special meal at which we were allowed to drink beer. The 'basic menu' was approved by the kitchen staff, and it was a very jolly affair with speeches, specially invited guests, back slapping, and 'sad' goodbyes. Those who owned fancy waistcoats were encouraged to wear them.

The beer was better known as 'small beer' and was brewed by a couple of senior boys; probably those who were leaving.

The beer was tested by our Housemaster before being given its blessing. If it was over a certain percentage of alcohol, it had to be watered-down.

When my own turn came to leave school, in 1964, the beer was declared unfit for consumption, both on account of its alcohol level, and appalling bad taste. It was replaced by shop-bought cider.

Many years later I met a fellow alumnus and asked him if the tradition still existed; he hadn't a clue what I was talking about. I imagine that the new Headmaster (who'd arrived the term after my departure) had called a halt to such archaic traditions.

The drinking of beer (even 'small beer') by 14-18 year old boys, may not be sanctioned by the good matrons of the local Townswomen's Guild, but it was part of a tradition that I imagine traced back to times when it was far safer to drink beer than water. I'm not saying that I wish the tradition still continued, but I'm very sorry that it's stopped.

The more we lose such traditions, the poorer we are. Of this I am convinced!