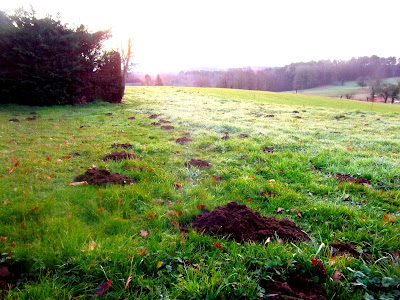 I'm feeling decidedly pissed off at the moment.

I don't like winter. It's cold, it's damp, and often foggy throughout the day. Even my long daily walks have become tiresome without the company of my faithful old pal, Bok.

The Moles are reeking havoc on Haddock's Paddock (above), Haddock's itself lies uncultivated, and the few winter tasks that still await my attention remain undone. I have little enthusiasm for anything at this time of year.

My hours are spent wandering around with a pair of secateurs in my hand, occasionally painting some bleak landscape, or sawing logs for the woodburner. When outdoors I seem to be permanently in gumboots, scarf, and gloves.

Elsewhere in the big ugly world, politicians are causing my blood pressure to rise in unprecedented leaps. Even being as deep in the countryside as is possible these days, I am still bombarded with news of foul murders, dangerous nonagenarian motorists, and common Z listers' ice-skating abilities (or lack of).

I need talk of sunshine, garden parties, and girls in summer dresses. I want to throw myself into 28C pool water, cook lamb chops on the BBQ, and pick ripe tomatoes from the garden. I'm a July baby, and my blood is tinged with sunshine.

It'll be May before I start my 2019 veg' growing campaign, and June before I start swimming again. In the meantime I eat body-warming soups, scour the meteo pages for suitable washing days, and wander aimlessly deciding which tasks to avoid first.

For me there are only two important parts of the year; summer, and waiting for summer. The latter always seems to drag, whilst the former rushes by.