I am re-posting this from December 2012. Luckily, Santander didn't manage to take over my bank, and Santander eventually set-up in the UK by themselves. They have now just announced that they will close 140 branches, with a loss of 1,270 jobs. I wonder who, in Brussels, insisted that they set-up shop in the UK? Whoever it was should be bloody shot! 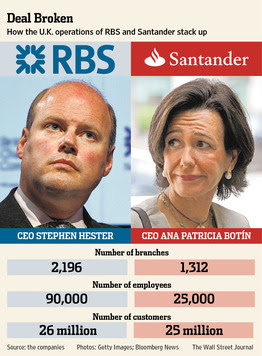 The European Commission recently INSISTED that my bank, The Royal Bank of Scotland (RBS), sell-off part of its UK banking business, including RBS branches in England and Wales.

I was informed by mail that the sale was going through to piss-poor Spanish bank Santander; this has now fallen through.... Thank goodness!

Who are these bloody anonymous unelected over-paid European bloody bureaucrats who dare give such instructions to the UK government? And why doesn't the UK government just tell them to piss off?

I wonder how much money (MY money) has been spent on foiling this unsuccessful and unnecessary takeover?

Are either Germany or France ever told that they must sell off their major businesses or industries to other EU countries? Somehow methinks NOT.

p.s. And while I'm on the subject, be very aware that the European Commission is trying to diminish Britain's hold on European FX trading. They want to 'SHARE IT AROUND'. As The City of London contributes around 15% of all government tax revenue (a MASSIVE amount for just one square mile of the UK), one can imagine what the EC's plans would do to Britain's economy.

Having re-read this from 2012 it makes me even angrier than I was before. 1,270 job losses; and I expect there'll be more!