Let's all attack the 'haves'. 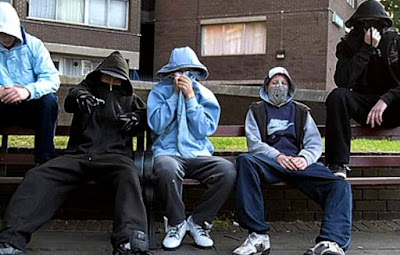 A certain jobless anarchist, Ian Bone, and his mates, have recently been shouting obscenities at a Conservative MP, and telling his small children that their father is 'hated', and is a 'totally horrible person'. Unacceptable behaviour that would only emanate from one of his ilk; and, of course, totally opposite to the truth.

This particular man, as well as certain uncontrollable trolls, seems to think that everyone should live in the same discomfort and poverty as themselves, just to assuage their extreme left wing leanings.

How we spend our lives is a matter of choice. Some chose to go out stealing, some wear hoodies and sit around on public benches dealing drugs, some even spend their days writing vile foul-mouthed insults about bloggers; whilst others enjoy the cut-n-thrust of a hard day's work. Some even work with their brains rather than their brawn. It takes all sorts.

Where we decide to live is also a matter of choice. I chose where I live because it offers a pleasant life-style. Of my three children, one lives in London, and the other two in Australia. But if one chooses to live in Glasgow, Grimethorpe, or Grimsby; so be it.

It is the easiest thing in the world to sit on your fat arse, live off state handouts, and blame everyone who has a decent standard of living for your oh-so-hard-done-by life. Chips-on-shoulders and the politics-of-envy poison the lives of the inert, and their self-destructive anger is used as a blunt instrument against life's successful businessmen and entrepreneurs. No-one who makes difficult choices in their working lives does so without considerable stress and financial risk, and they should be lauded rather than derided.

I just wish that those who spend their time attacking the well-educated and successful would sort out their own lives before attacking those who have had the guts to risk all.

So, you want me to 'Hug a Hoodie' Mr Cameron? Well no thank you! I'd much rather shake the hand of a hard working businessman.

As for Ian Bone, I'm amazed he's not in prison. I thought that type of harassment was illegal; but maybe it's only so if the victim is 'foreign'.