It's that time of year again.

As 'new boys' we were ascribed a 'junior common room' rather than a study, and all 15 (or so) of us new boys assembled there; nervously shuffling in our brand new, crisp, school uniforms. None of us knew anyone else, and I found myself naturally searching-out those who, like myself, were southerners. It seemed as good a way as any to make friends, looking for others who had something in common.

There were five of us who hailed from south of Watford; Po lived in Tehran although was originally from Sussex, Nick was from Pinner, Alan was from Park Lane (very posh), Monty was from Wentworth, and I was from the south coast. These became, and remained, my closest friends.

We were extremely nervous. We'd all read Tom Brown's School Days and were expecting cruel Flashman-like seniors to be on the prowl for boys to thrash and bully. 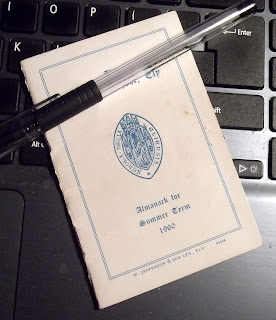 Finding one's way around was extremely complicated, but was helped by the publication of this tiny almanack which we were obliged to carry with us at all times. This gave times of lessons, cathedral services to be attended, mealtimes, names and addresses of teachers, various societies, occasional films, sports, and weekly events. No excuse for lateness would ever be accepted. 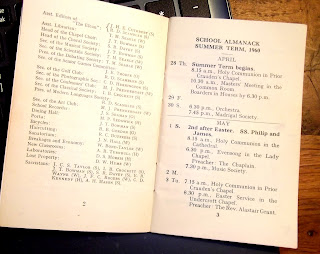 I remember those first few weeks with real trepidation. We were all desperately trying to look as if we knew what we were doing; but didn't. We had entered a whole new world.

I feel very sorry for children who are going through the same thing this week. I just hope their experiences aren't as harrowing as mine.

And yes; I've still got my tiny almanack from all those years ago.