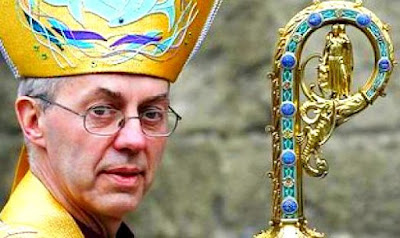 Much has been written about this man in recent times, but he warrants more.

Justin Welby is a bit of a fire-brand. The Eton and Trinity educated, ex-oil executive cleric, has recently become quite self-righteously outspoken.

He has become an open critic of the tax affairs of Amazon; forgetting that his own business (of which he's the boss) invests very heavily in the on-line company.

In my short Stock Exchange career, the company for whom I worked (as a blue button, trainee broker) was one of about four who held accounts for The Church of England Commissioners. They held HUGE portfolios, and traded vast amounts almost daily. We, as their minions, were sworn to secrecy about their trading. No mention was allowed of any deals; upon pain of death. It was taken very seriously. They were, and are, very astute investors!

The church itself pays no tax, employs people on 'zero hours contracts', and places its vast wealth where they hope it will bring the greatest returns; they are classic Capitalists. I have nothing against all that, but to then spout Socialist nonsense about others who do the same is just plain hypocrisy.

Addressing a Trades Union meeting about how nasty the system is, may bring you applause from a gathering of Marxists, but for the rest of us it simply makes him look like just another cleric who should concentrate more on his 'gods and devils' rather than economics.

Of course we should ALL criticise those huge international companies who avoid paying their fair-share of tax, but we should make sure that our own house is in order first!

p.s. The Arch-hypocrite of Canterbury has also just evicted some Syrian refugees from his palace. The family of two adults and their four small school-age children have been 'discretely moved' to another, less fashionable, part of London. Hmmmm.