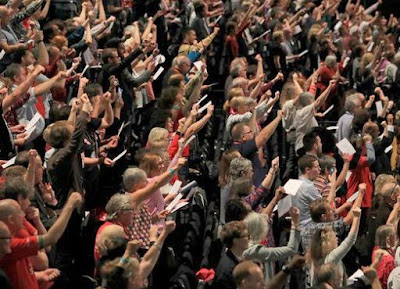 It's political party conference season in the UK. The Lib Dims started off, holding their major bash in a caravan, in some car park (whereabouts unknown).

At the moment it's the turn of the Socialists in Liverpool, and next week the Tories hold their bash in Birmingham.

I never really take much notice of conference resolutions, as they tend to be spread like confetti for the sole benefit of journalists.

However, the Socialists seem desperate to frighten people, by putting out some of the most dangerously irresponsible proposals for years.

There were threats to lynch 'bankers and speculators', 'the elite', and 'the establishment'. There was talk of re-nationalising just about everything, and insistence that all 'anti trade union laws' should be scrapped. All companies with more than 250 employees will be made to give 10% of the company shares to the workers; and so it continued in this overtly Marxist fashion; even Arch-hypocrite Welby was praised for his Communist credentials, and some young female MP called for a general strike. Clenched fists were everywhere; even from the Islington Champagne Socialists.

Now we await the Tory conference, and the mish-mash that is known as 'Brexit'. There will be fighting, back stabbing, and a possible coup or two. May will attempt to convince the blue rinse brigade of her successes against unemployment, her highest ever financial support for the NHS, and how nasty the Brussels bunch are. There will be cheering to equal that for Corbyn in Liverpool. No doubt they will also sing 'Jerusalem' (which, of course, Corbyn would totally ban).

Bored with it all? So am I.