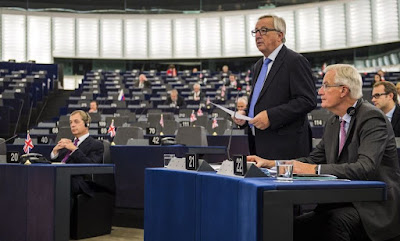 I'm so pissed off by all the brexit in-fighting and back-stabbing that I've devised my own 'white paper'.

Right Mrs May, let's have no more mucking about; go and tell those overpaid Brussels bullies that all negotiations are now over. Finito.

No handing over our tens of billions, no trade agreements, and no customs union. From today we are finished with them, and if they wish to continue selling all their cars, washing machines, and beer to the UK, they had better hot-foot to Westminster and start reciprocal negotiations pretty bloody quick, otherwise we'll all be driving Cadillacs, drinking Budweiser, swapping Airbus for Boeing, and wearing Ralph Lauren T Shirts.

And by the way, all that money we've paid in since 1973 to build those fancy EU buildings in Brussels and elsewhere, we'll now be selling back our share of them to the rest of you, and we'll want paying 'pronto'. Everything else we've paid-for, for the use of the EU big-wigs, will be sold-off later.

I believe that the EU exports a staggering £341 Billion worth of goods to the UK annually; 53% of all UK imports. Now if that ain't the finest thumb-screw to negotiate with, I don't know what is!

Make them come to you; not you go cap-in-hand to them. Enough is enough.