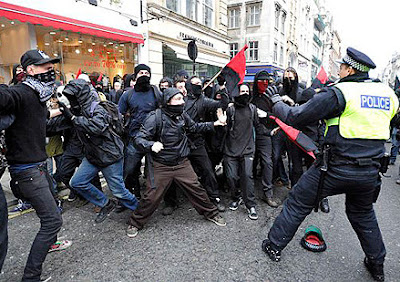 I know this post will be received with shouts of "Racist", but I couldn't give a Monkey's.

Boris recently defended those Muslim women who wish to wear clothing that he claimed made them look like Letter boxes or Bank robbers. I would not have been so kind.

Forget the Letter boxes nonsense, etc, it's the covering of one's face in public that worries most of us. It makes people anxious, frightens children, and whatever they say, it looks to me like the worst type of third-world female repression.

Whilst at it, I would also ban the wearing of hoodies and all types of face masks, and I would ban those ugly white smiling masks that Anarchists wear when rioting; as well as the Niqab of course.

I have nothing against people wearing such clothing in the privacy of their own homes, but NOT when in public. If Niqab wearers wish to demonstrate devotion to their faith; do it at home or in a mosque, but keep the garb packed away whilst in the bank, at the airport, or on the High Street.

We need to see people's faces, it's an important part of being 'human'; even motorcyclists are asked to remove their helmets when buying petrol, and do so willingly.

The left tried to make Boris's outburst into a party-political matter, but I believe that these concerns cover all political colours. Personally I cannot see this as being anything more than social concern.

If these Niqab wearing women really think of themselves as being so desirable that men would die in the rush for even a glance, then they are mistaken. Of course men like to see a pretty face (I certainly do), but we are mostly blessed with self control. If on the other hand they think it's just Muslim men who cannot control themselves; then their problem is 'internal'.