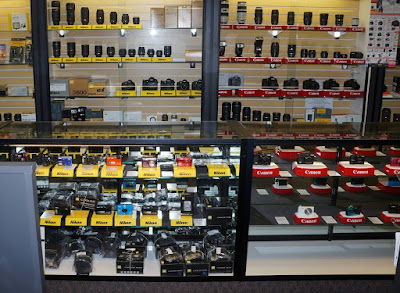 Some time ago, a friend of mine bought himself a new pocket camera from a Leclerc Supermarket.

When he got home he discovered that the box was empty, it was one of many that had been used as part of a display.

He returned to the supermarket, and laughed as he explained their silly mistake, and he asked that they exchange it for a box with an actual camera inside.

Well, nothing of this sort is easy in France. Regardless of normal EU rules and regulations, they refused to give him the camera he'd paid for, or even refund his money. As you can imagine, my friend wasn't happy. He'd bought a camera, and they'd given him an empty box.

He told them he wasn't moving until they gave him what he'd paid for, he grabbed a chair, and refused to budge; of course they became irate. I'm not sure if they didn't even threaten to call the Gendarmes.

At one stage in the proceedings he took a box of cereal from a shelf, and spread the contents all over the floor.

Eventually they got fed-up with him, and gave him his camera.

Amazing the lengths you have to go to sometimes, just to be given what you've actually paid for.