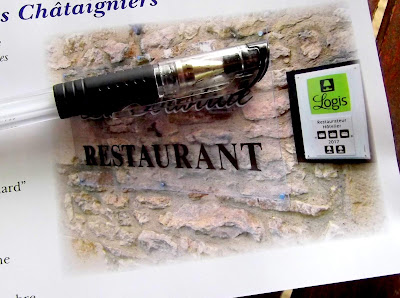 We don't eat out that often; maybe once every couple of weeks. At this time of year a bit more.

The other night I decided at the last minute that we would go to a favourite nearby restaurant. I didn't book, as I considered it unnecessary.

When we arrived we were told that it was closed.

Not wanting to spoil my little surprise, I drove up to another restaurant where we hadn't eaten for years; it was now run by a Dutch couple.

Being the cook of the family, I know all the little tricks of the restaurant trade, and this place was full of them. The first indication was that I was told that my selection of 'Lamb shank in red wine sauce' would take an extra 20 mins (just the time it would take to heat-it-up in a hot water bath). I should have changed my choice there and then.

In fact the Lamb was quite pleasant, but Michel Guérard's vegetable supplier must have just visited, and it was served with a silly selection of half cooked, and unseasoned, colourful baby vegs. Lady Magnon wisely chose a small steak, which was accompanied by the same array of vegs.

We then ate a selection of cheeses which, frankly, wasn't even enough to feed a starving mouse. The fact that huge lorries were thundering past at just a few metres from our plates, didn't make the experience much better.

On the plus side, I'd ordered a good Pécharmant which was 'correct'.

Living in an area of renowned gastronomy, it seems to be getting rarer and rarer to eat well in local hostelries. Too many 'chefs' are jumping on too many bandwagons, and are producing poor imitations of TV chef's decorative nouvelle cuisine fare. Even Michel Guérard himself would have turned up his nose at this place.

Good cooking is not about cutting corners, it's about the love of one's craft; and there doesn't seem to be a great deal of love about any more.

p.s. The staff were very attentive!