Me and Monsieur B. 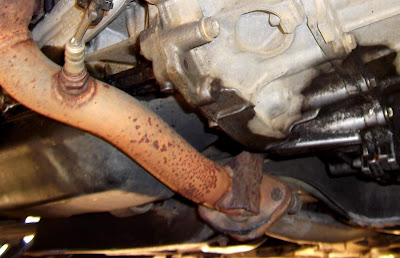 Yesterday I visited my mechanic.

I was bloody angry, I'd managed to hit a lump of concrete with the underneath of the Compact Royce, and she was making a very nasty growling noise.

Monsieur B told me to come at 9.30 am; I arrived at 9.00. With his Heath-Robinson ageing contraption he lifted her into the air, and together we looked at the spot which was causing the trouble. Where the manifold meets the exhaust system, it had been severely bashed and come slightly apart.

He dismantled the two pipes, and made his prognosis. He would have to heat it, and bash it. We pulled the oxy/acetylene kit into position beneath the engine, and lit up. Once the piece of bent metal was red hot, I held the flaming torch as he bashed the offending joint with a hammer until it was roughly back to its original shape, put it all back together again, and Voila; the growl had gone.

Mechanics like Monsieur B are fast disappearing, in fact he is officially retired. He still does bits for me because we are old friends. Had I gone to a pukka Peugeot garage, they would have sold me a whole new expensive manifold system, at a very hefty price. As it was I crossed Monsieur B's palm with €30, and stayed-on for an extra half hour's chat.

Whilst there he told me that he had bought a Peugeot like mine, and was converting it to run on Ethanol (I think). With a cheap (€250) adaptor, he would then run the car for half the price of petrol. I said I'd pop in to see him in a month's time to see how it was going.

Young car owners of the future will never know the likes of Monsieur B; a dying breed.