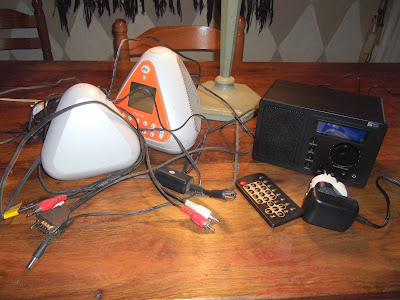 I've been a serious insomniac for well over 40 years; I manage about 3-4 hours sleep per night, the rest of my in-bed non-sleeping time is usually spent listening to one of three UK Radio stations through an uncomfortable earpiece.

However, about two weeks ago, my orange Sky Gnome radio (above left) died; I believe they have a 6 year life-span with a very efficient built in obsolescence chip. I've owned two, and both have gone the same way.

The Sky Gnome received its signal from my satellite TV Sky Box; whatever I could view, or hear, on TV could also be listened to on my bedroom radio. It was a good system with easy to use pre-set controls (in the dark).

To replace it I recently bought an 'Ocean Digital Internet Radio WR220 WiFi Wlan Receiver Tuner' (above right). The effing thing didn't work! Even my genius friend Craig couldn't get the bugger working correctly. I may persevere later.

So, back to the drawing board, and instead I've plumped for what I should probably have bought in the first place; a simple Amazon Fire Tablet (as recommended by Craig). It has all I require; a power socket, an earpiece socket, and gawd knows how many radio stations at my finger tips. It was also reasonably cheap, and arrived in the post the following day (well done Amazon). 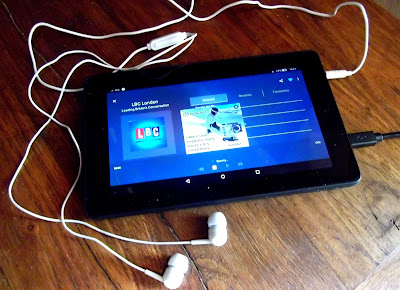 But this was not without it's own problems. Getting the bloody thing connected to my router was not easy, which is apparently quite common, and it took Craig's genius to sort things out.

It now works well, and if I wished, I could also read or write this whilst lying in bed!

In case you're interested, I listen to LBC, BBC World Service, and BBC Radio 4 Extra. News, Plays, Comedy, and Argument; with a smidgen of Politics thrown in just for fun. I don't listen to music.