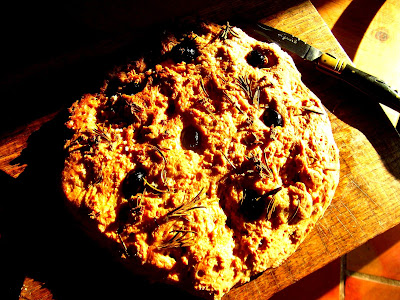 Our wood-fired cooker will be lit less frequently from now on. The frosty, -6 C, mornings should be less common, and slightly more balmy temperatures well above zero are promised.

So, as we have probably lit our oven for the last time for a while, I attempted some Focaccia. I used half/half wholemeal and ordinary flour, and proceeded as per usual.

I looks good, smells good, and tastes pretty good. Next time, however, I'll revert to my usual 100% ordinary white flour. I don't think the wholemeal flour added anything to the final product.