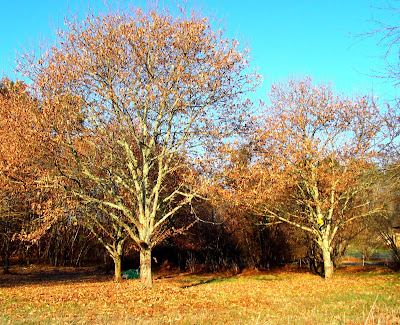 In the past, at this time of year, the Chestnut trees would be totally devoid of leaves, but this year there are two types of dead leaves; one lot clinging-on, and another lot underneath. (see above).

Still clinging to the trees they are small and twisted, and on the ground they are normal Chestnut leaf shape; the former died on the trees mid-season, and the latter fell to the ground in Autumn.

This illustrates the problem we are facing with the Cynips wasp. When this tiny parasitic insect lays her eggs amongst the year's new shoots, it kills off the growth, resulting in masses of dead wrinkled leaves throughout the growing season. This can eventually lead to the death of the whole tree. At a minimum it will drastically reduce the crop of the tree by anything up to 80 or 90%.

Cynips originally arrived in the South of France in 2002, when it was instantly dealt with by cutting and burning every affected tree; this cured the problem at once. Cynips returned again in 2010 and has since spread to a much wider area; including ours.

Much beard tugging and head scratching has since taken place, and certain preventative/curative measures are already being tested. However, it doesn't look good for the future of Chestnut growing in our area, although there are still new plantations popping-up here and there, as certain varieties are less prone to the problem than others.

The Chestnut tree, either wild or grafted, is an essential part of our landscape; to see them all die out would be disastrous.