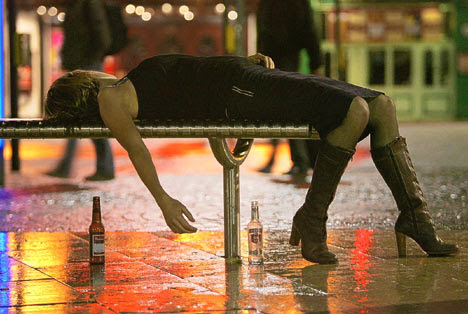 As if it hasn't enough problems, Simon Stevens, the Chief Executive of NHS England, recently suggested that NHS will soon stand for 'National Hangover Service'.

He said that in winter, at the very time when people are more vulnerable to illness, drunks are having to be gathered from the streets in huge numbers, and transporting them by ambulance is stretching the service to the limit. Those drunks are no doubt the same ones who moan about the NHS being under-funded.

Why people, who have drunk themselves into a stupor, are taken to A & E, I have no idea; an easily sluice-able over-night holding pen/cell would be much more appropriate (with a nightly charge of £200, a packet of plasters at £50, strong coffee at £20 per cup, and delivery by ambulance at £50 per mile).

Seriously bad drunken behaviour, or simple unconsciousness, seems to be the regular 'aim' of a good night out these days. The slightest excuse for excess sees streets awash with vomit, accompanied by violent and abusive posturing. Rape, or at least unwanted sexual activity, is also common.

We've possibly all been a bit 'drunk' a few times in our lives, and in our youth possibly even slightly misbehaved, but going out with the intention of getting paralytic is a relatively recent phenomenon; it's bragged about, and fulfilled, and the emergency services are then expect to clear-up the mess.

We live in strange times, and the NHS takes much of the fall-out.

p.s. On the subject of A & E, I heard a woman saying recently that she'd been shocked to see her local department filled with people with suitcases, who'd come directly from the airport. None of them could speak a word of English; except being able to say "To A & E please" to the taxi driver. Quite worrying.