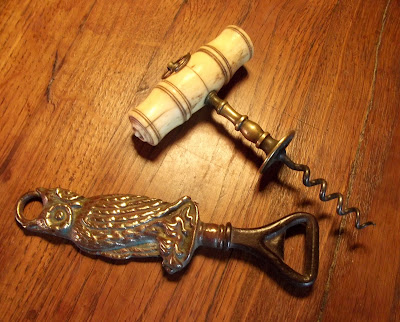 After my people died, I had the unpleasant task of emptying their quite large Shropshire home. They had managed to squeeze the contents of three houses into one!

A few bits of the furniture were actually mine, but by far the majority was sent off to a saleroom in Shrewsbury where it was sold for a pittance.

Luckily I had the foresight to keep a couple of bits as keepsakes. My father's small desk, that was a gift from his father, had been part of a set of furniture made specially for him by their local carpenter in Sussex. It comprised of a table and 6 chairs, a sideboard, and the small desk itself; all made in limed Oak. The pieces were destined for his rooms in Milk Street, in The City. Nowadays one would simply head for Ikea.

However, amongst a few small things that I couldn't let go were the above. My father's antique corkscrew, and his almost-antique Owl bottle opener.

I use neither, but they sit at the back of our infamous untidy kitchen drawer waiting patiently. There are certain things that have such strong ties to one's past that they could never be let go; these two are such.

My own sons have little interest in antiques, but I'd like them to hang on to these.