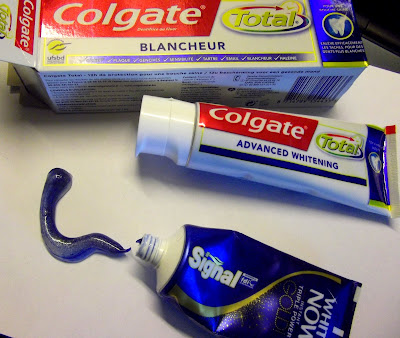 What went through the minds of the boffins at the 'Signal' factory, when they invented this stuff: I cannot imagine.

There was no mention on the packet that it was dark blue, and that your mouth would end up filled with navy coloured foam.

The very first time I used it, I was quite shocked and imagined there must have been some technical fault at the factory (maybe there was).

I persevered for a while; I had paid a couple of Euros for it after all. But I've now decided that dark blue is not for me, and I've reinvested in some good old 'Colgate' white stuff.

At least, I presume it's white.