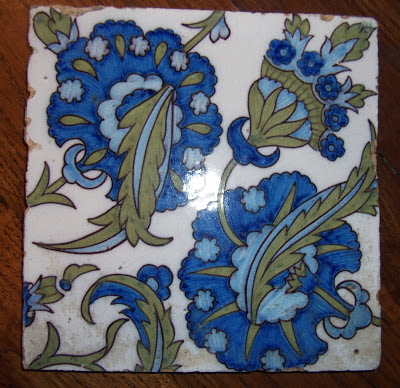 I can't remember where I bought them, but we have several of these old 'Persian style' tiles. They've followed us from home to home, tucked away in the bottom of some cardboard box, and been confined to various sheds.

Recently, however, Lady Magnon decided to put them out on the kitchen windowsill, and also to find out a bit more about them from 'the net'. 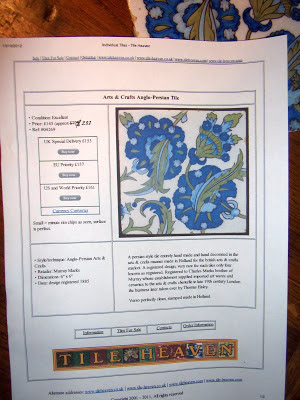 And she has just discovered THIS (above). They were hand made and painted in Holland in 1885, and were imported into England to cater for London's ever-eager late 19th C Arts and Crafts clientelle. They were marketed by a Mr Murray Marks.

And the best bit? They're priced at £145 for each, very rare, tile (now you have to imagine Cro dancing an energetic hornpipe).

If you recognise them, and have a boxful in your own garden shed, may I suggest that you handle them with care!