Should one ALWAYS tell the truth? 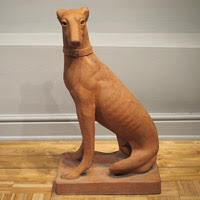 One of the problems of my having been an antique dealer (even briefly) is that people are always asking advice, or wanting to show me their prized possessions.

The Art Deco terracotta greyhound, above is very similar to one bought by a friend, many years ago, at a prestigious antiques fair here in France. He was extremely proud of it, and even more so because he'd managed to buy it for just a few hundred quid.

At once I could see its problems. The terracotta was coming off as powder on my hands, and there was also a thin film of cement dust in all the crevices. I turned it over and scratched very gently into the base; underneath the red of the clay, it was white.

When I informed my friend that is was a plaster copy, painted with a thin film of liquid clay, he refused to believe me, went berserk, and we've never spoken since.

On another occasion, a female friend wanted to show me a small antique Oak mirror that she'd bought. It had a chunky frame which concealed a secret bible hiding compartment in the back.

"How old do you think it is?" she asked.

"About two weeks?" I replied.

"It's actually seventeenth century" she assured me; looking rather smug.

"They didn't have fibreglass in the seventeenth century" I replied; whilst pointing to the proof.

Again, several hundred quid had been forked-out, and her face turned to an ashen grey.

Quite recently I was at her house, and I saw her pointing out the same mirror to another guest, saying "It's seventeenth century, you know!" She had simply refused to accept the truth; I think I might have done the same, it was very convincing!