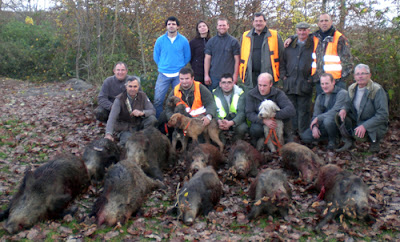 In the 'good old days' of Fox Hunting in the UK, the Master of the Hunt was contacted by farmers when they had a serious Fox problem.

Similarly here, the local hunters are contacted by farmers when they become over-run with either Wild Boar or Roe Deer.

My friend, and neighbour, José has recently had trouble with Boar digging up his newish Chestnut plantation. I go through the wood almost every morning with the dogs, and have personally seen the appalling damage they do. But the Chasseurs have yet to come.

I understand that they've received so many requests since the hunting season re-opened, that they simply haven't had the time to get round to everyone's land. It looks as if the Wild Boar population has become completely out of control. 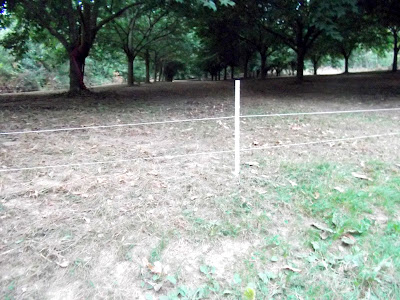 So, until they have a free Sunday, José has erected this classic anti-Boar, two wire, low down, electric fence. The dogs aren't too keen on it, but I expect it'll do the job.

One good side to this over-population, however, is that Wild Boar (which is very good eating) is in plentiful supply. Although why I can never get hold of a free gigot or two baffles me. Come on guys..... just a small one!

N.B. The above are not our local lads; just a picture borrowed from Mr Google. The picture of the fence was taken very early in the morning; hence the dreadful quality.
Posted by Cro Magnon at 04:52