The Glorious 8th of May. 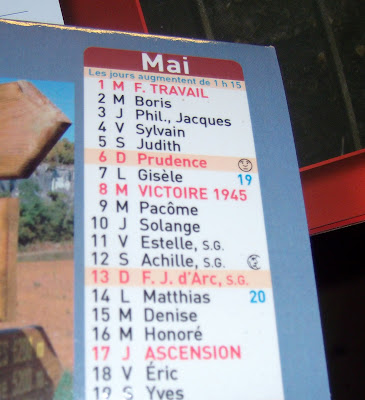 It's the 8th of May, which, as every French écolier will tell you, is the day when France won the war, back in 1945 (see calandar above).

It's also to be a day of National Mourning, as the French illiterati have just seen fit to elect one of Europe's dying breed of 'Tax and Spend' Socialist (so-called) Leaders. I despair.

I notice that Germany's Chancellor Merkel has immediately invited the new French president, Francois Hollande, to meet her (in Germany). Best to get him under her thumb as quickly as possible. If he thinks he's going to drag Germany down, as he intends doing with France, he hasn't counted on the iron fist of Matron Merkel.

Just to add some spice to his 4 year rule, might I suggest he uses Gordon Brown as his personal financial guru, and Tony Blair as his 'when to pull out just before everything goes pear-shaped' advisor.

p.s. Eagle-eyed Brits will notice that there was no St Ken day (guffaw, guffaw) at the beginning of May... Foregone conclusion!