Lady Magnon Is Driving Me MAD! 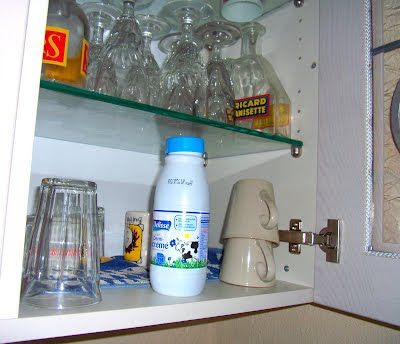 Lady M was stamping about in the kitchen yesterday morning; she couldn't find the milk. As it happened, I'd given the dogs the remains of the old bottle, and had only just replaced it by a brand new one in the fridge. I knew there WAS some, and I knew exactly where it was.

She said I was going bonkers, and I'd have to check into the local lunatic asylum. I searched everywhere.... still no milk. For a nano-second I began to think she was right (that I WAS going bonkers), then, having checked the bathroom, the studio, the barn, and the oven, I eventually found the bottle in the glass cupboard.

'There, you see, you ARE going mad' she said with a knowing smile on her ever-so-smug face.

Luckily Cro does still have a few working faculties, and as soon as I touched the bottle I could feel that it was cold.... it HAD been in the fridge, and somebody else (guess who) had put it in the glass cupboard.

There's no fooling Cro! It's HER who's going bonkers; not me! She not only forgets what she did just a few seconds before; but she ALWAYS tries to put the blame on me!

p.s. She's off to Blighty this afternoon, for a spot of babysitting. I'm holding the fort!.... AGAIN.