Obesity and the Beast. 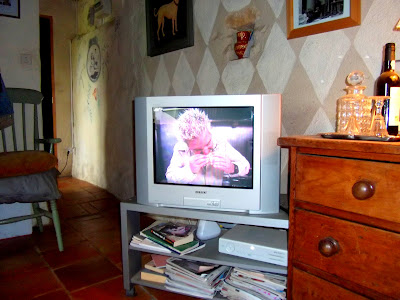 I'm not averse to occasionally watching either Hugh Fearnley-Thing or Jamie Oliver on TV. Their programmes can be amusing, informative, and occasionally both.

But recently, whilst channel hopping, I came across this bleached, spiky-haired, 'person' above. I don't know his name, but he appears in a programme called 'Diners, Drive-ins, and Dives', which, if you enjoy the combination of 'shit-n-shouting', can be found on The Food Network.

I have never seen such a disgusting food programme. Rather than promoting gastronomy, the aim seemed to be to find the most horrendous, artery-clogging, rubbish in all of America. For example; imagine a HUGE multi-layer burger, dip it in batter and deep-fry, cover it with cheese and some kind of white blob (faux-mayo?), and serve to a hairy, obese, red-necked, truck-driver; that's about as good as it gets.

The way the programme is put-together is also worthy of some comment. No shot or dialogue is of more than 2 seconds duration (which I presume says something about the attention-span of its viewers), and the presenter has his face almost permanently stuck into the side of some vulgar, lard-saturated, burger (as above).

Is it any wonder that obesity is becoming endemic? Food programmes don't get any worse than this..... I dare you to take a look; OK then, don't!