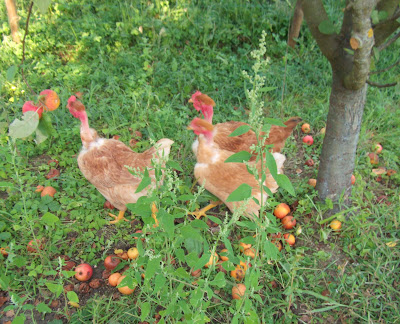 We've now named our 3 new hens. It wasn't an easy job, but with the help of Harvey J and Ollie (my grandsons aged 5 and 3) we've finally come up with what we believe to be the perfect names.

The darker one (rear of the two on the right)  had already been named Edwina (she just had to be, didn't she). And the other two are both now to be called Richard. One Edwina and two Richards. Easy to remember, and no need to bother sorting out the two non-Edwinas, who ARE very similar.

Why did they choose a boys name; twice? I have no idea, but if you're 5 and 3 the difference between male and female chickens is probably still a little confusing; and heck, why bother with two names when only one will do.