Gregorian Calendar, The No 10, The No 12, The New Millennium. 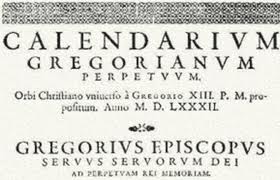 I reprint this rant from my book 'Périgord Life. Je t'adore 24, encore'.
A year is based on 365.2425 days when averaged over 400 years. In pre-Gregorian days, they had failed to notice those important decimal points and over the centuries a discrepancy of 10 days had built up which needed to be corrected. In 1752, Britain jumped from the 4th directly to the 15th of October to compensate, and at the same time changed New Year’s Day from March 25th to January 1st.
Originally we had 10 months in the year, hence SEPTember, OCTOber, NOVEMber and DECEMber. Julius Caesar was the first to ostentatiously immortalise himself in calendar form; squeezing in the extra month of July. Then Augustus Caesar, not to be outdone, followed suit with August, making 12 smaller months with the Latin numerical references to 7, 8, 9, and 10 remaining.
12 is a GOOD number, it is divisible by 2, 3, 4, and 6. 10 is NOT so good, being divisible only by 2 and 5. Why, therefore, is there such a concentration throughout Europe on decimalisation when we all quite happily cope with 12 months of each year? One would have thought that, by now, some overpaid number-cruncher in Brussels would have insisted that we all revert to the pre-Caesar calendar, and its 10 month year.
For many years I’ve thought in Kilometres, Centigrade, and Kilos, but I still have a nostalgic hankering for twelve pence to a shilling, buying 8 ounces of gob-stoppers at the corner shop, swallowing pints of Old Peculiar down at the ‘Horse-n-Bucket’, and measuring a cricket pitch in yards. Is this because I was born when such things were unquestioned? Or am I just being nostalgic? Twelve-ism is alive and well as far as I’m concerned, but I have reluctantly embraced the simpler, yet less user-friendly concept of ten.
In the decimal system we count from 1 to 10; to count from 0 to 9 would be folly. Yet only recently, look how many people mistakenly welcomed the new millennium on January 1st 2000 (i.e. counting from 0 to 9) instead of on ‘the first of the first of the first’ (i.e. 1 Jan 2001). Were they simply blinded by zeros? Strangely, on the change from the 19th to the 20th centuries there was no such confusion, and The Times (of London) newspaper of the day records that celebrations correctly took place on 1st Jan 1901. During the following century some of us don’t seem to have advanced that much mathematically. For me, it still wrangles that the majority of revelers acted a year too early, then sadly failed to welcome the correct ‘New Millennium’ at the start of 2001 (i.e. the first day of the first month of the year MMI).