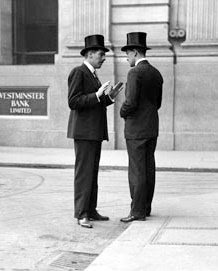 My new found retirement (what retirement!) has made me reflect on my 'working' past.

It was only about a week before I left school that I suddenly realised that life was about to become serious, and I'd have to get myself some sort of paid employment.... Strangely, no-one had mentioned this before.

I wasn't prepared to sweep streets or run a tobacconist's shop, so I plumped for the easy option and joined London's biggest playground for overgrown ex-schoolboys; The Stock Exchange.

My father offered me free use of his city tailor, I bought my bowler from Lock's, and my brolly from Swain Adeney Brigg. I had my stiff white collars hand-made in Jermyn Street, and bought my striped collarless shirts from good-old Marks-n-Sparks. I was ready to conquer the financial world.

I took a position with Sheppards and Co, London's oldest firm of brokers, at the staggering salary of 500 guineas a year (this was in 1964), and became what was then called a 'Blue Button' (I don't know if this title still exists); a trainee dogsbody broker.

Almost at once I realised that this was NOT what I wanted to do with my life, but I stuck with it because it afforded me a tiny place in Bayswater, with enough left over to live in reasonable style (all on 10 quid a week). I enjoyed the dandy-ish side of city life, and the kudos of being someone with 'prospects'. One of our senior partners even insisted that I, along with one other Blue Button, attended certain city held 'coming-out parties', where the country's most eligible fillies gathered throughout 'The Season'. (The idea being to make an honest woman out of one of them, and have millionaire prospects over night).

I'd been with Sheppards for just over a year when the word 'bonus' started to be bandied about, and when I opened THAT envelope, I was stunned to discover that mine was twice my annual salary. I couldn't believe my luck, I suddenly had £1000 in the bank and the temptation was too much. I handed in my notice (not what they were expecting) and headed directly for Paris.

City life is brain-numbing. It is simply about MONEY; nothing else. There is no soul in the work, and no creativity. Often I didn't know what on earth I was doing, but I knew HOW it was done, and I did it reasonably well.  As long as the bottom line was healthy everyone was happy. On reflection, I HATED EVERY SINGLE MOMENT OF IT (other than my bonus).

I chose the picture above because when visiting The Bank of England it was traditional for certain brokers (my firm in particular) to wear a silk hat. Nowadays I can hardly believe that all those years ago I used to strut around Throgmorton Street wearing a freshly brushed topper, but it was all part of the wretched job.

Thank goodness I was wise enough to look for pastures new!