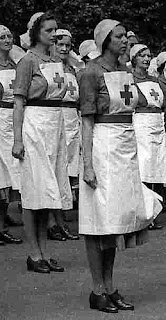 During the last war, many expectant mothers from London were sent out to the countryside to give birth; things were considered much safer there. One such reception village was adjacent to my native Surrey village of Lingfield; it's called Dormansland. Apparently, throughout the war, the whole village was permanently awash with hundreds of heavily pregnant women.

Like so many who wished to 'do their bit', my mother enrolled with the Red Cross to become a temporary war-time nurse, and her main duty, after some initial training, was to walk the pavements of Dormansland just in case any of the expectant mums was to be 'caught short'.

I believe that my mother (not amongst those above) was the only nurse during the whole period of the war to actually assist in an outdoors delivery; 'on the pavement'.

The baby was a boy, and the young woman assured my mother that had it been a girl she would definitely have named it after her.

Well, I suppose you can't have everything. She did receive a few kind letters from The Queen, however; but then I believe everyone did in those days.
Posted by Cro Magnon at 05:10