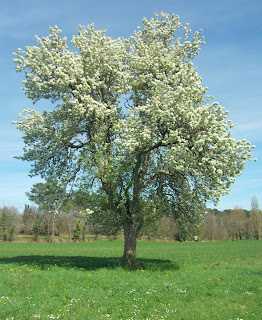 This Pear Tree is just a few metres from the house. It's huge, ancient, and magnificent. And always bears mountains of fruit.

However, it's also pretty useless. Just before the fruit is ripe, it's grainy and as hard as a rock. And the moment it ripens, it falls and turns to mush. I've known this tree for 40 years, and in all that time I've only managed to eat a handful of pears that were caught 'just right'.

Every year it's the same. We admire the blossom in spring, and make definite plans to do something with its certain bounteous crop. And every year we fail.

However not all Pear Trees are thus. On the day that my grandson Finn was born, I planted him a 'Doyenne du Comice'; probably the world's best pear. We've already eaten its fruit, and it's wonderful; I recommend the variety to anyone wishing to plant a Pear Tree. One picks the fruit in October, and leaves it until November before eating. Yum.
Posted by Cro Magnon at 04:46