I am writing this out of sadness; not as criticism.
I thoroughly approved of Mrs Thatcher's programme of selling Council Houses to long term residents. It brought people into the property market who otherwise would never have found it possible.
What I couldn't understand, however, was why she then refused to allow councils to reinvest the proceeds in new public housing. It didn't make sense, but I presume there was some logic behind it. 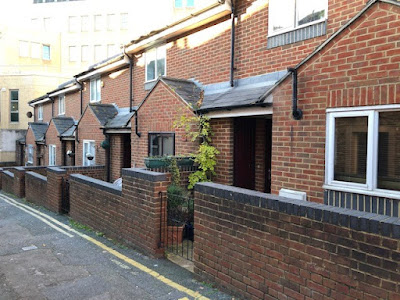 This short row of five nearby houses (above) is typical of local affordable council housing, but the one at the far end has been totally trashed, and is no longer habitable; I cannot tell you how much this saddens me. I walk past them very often. 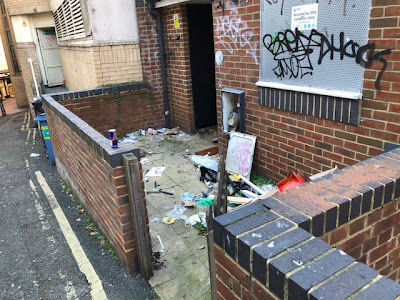 Back in about 1980 I watched a TV documentary about a similar build of social housing in Liverpool. They were not built in a terrace like the above, but arranged in what the architect described as 'Resembling a Cornish Fishing Village'. It was a beautiful development, and rightly won prizes for the designer. I would have been very happy to have lived there myself.
Sadly it didn't take long for the new residents to completely destroy the 'village'. At the time of the TV documentary, the houses were boarded-up, old cars and mattresses were dumped in the gardens, and everywhere was sprayed with graffiti. About 90% of the homes had been treated with the same contempt as the one illustrated above; some had been burned down. It was a depressing sight.
Three of the above are still in a good state, one is a bit tatty, and one is now boarded-up. Brighton Council says it would be too expensive to restore it to its former state. What a shame.

Public housing is an essential part of any caring society, and it's shocking that so often it's the very people who need them most, who end-up wrecking them. I guarantee that those who bought their homes under Mrs Thatcher's scheme didn't trash theirs.

I don't want this to sound too much like criticism, but I do find this lack of respect EXTREMELY SAD. Of course, the vast majority of people in public housing are perfectly respectful of their homes, but, as we all know, it only takes a few to give the others a bad name.