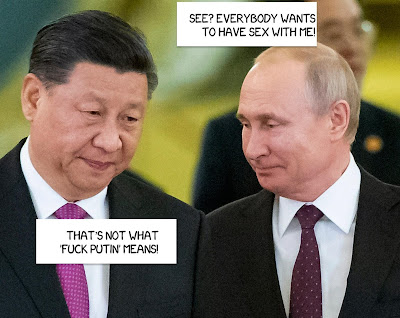 Putin has always claimed that his reason for invading Ukraine was to 'De-Militarise, and De-Nazify'.

Can anyone explain to me (especially if you are a Russian Putin supporter) how slaughtering women, children, and non-combatants, is supposed to achieve this?

To 'De-Militarise' you would need to exclusively attack military targets. And to 'De-Nazify' you would need to seek-out those Nazis. In which case attempting to totally destroy all buildings, infrastructure, and essential services, has nothing to do with either of Putin's aims, and becomes just pointless destruction.

So, how's he getting on? Well, the world is pouring new hard-core military kit into Ukraine; which is being used very successfully against him, and as far as the de-Nazifying is going; I'm not too sure if there were any Nazis there in the first place. Such childish claims do Putin no favours whatsoever.

If his is simply an expansionist policy, then why not say so. Why not also tell the Russian people how many of their sons have lost their lives. Why not also let the world's press/media tell the truth about what's going on in Ukraine?

If he has something to hide, or if he is ashamed of his invasion; then he should stop it AT ONCE.

And, oh dear oh dear..... now we see that the effing idiot is threatening to bomb the UK. Maybe we need de-Militarising and de-Nazifying as well. What a plonker!