The Charge of the Woke Brigade.

It is being claimed that the current spate of jiggery-wokery is responsible for Labour's dire results at the polls recently. I'm sure these claims are right; people are sick to death of all this silliness.
So, what is prompting all this Woke popularity amongst the juvenile 'far-left'? 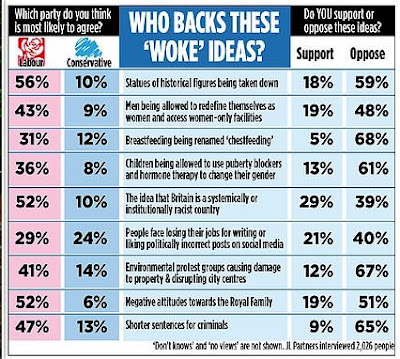 Obviously, being out of favour politically is hurtful; and Labour supporters are frustrated. But surely the best way to regain popularity is to become trusted again, and this will never happen whilst all this negativity abounds. Their current bout of disgraceful, thinly veiled, anti-Semitism, and support for the Hamas terrorists, doesn't help their cause either.
The 'Woke Generation' (how I hate that expression) are shooting themselves in the foot. They are desperate for Labour's far-left to regain power, and are demonstrating exactly how that power would be enacted; or at least how they wish it would! Of course, the Labour Party rarely shows any interest in the desires or interests of their more radical supporters; who presumably are seen as trouble-makers, just as they are outside the party.
The Labour voters' choice is now a difficult one; it's between the untrustworthy extreme left, and the more liberal 'Newer' Labour. The former fills people with horror, and the latter is seen as weak and ineffective.
Sir Keir, et al, should remember that the vast majority of the British voting public are tolerant, fair minded, and moderate people; and that Wokery has no place in any Labour manifesto.
In desperation I now hear that Sir Keir has employed Deborah Mattinson as his 'Director of Strategy'. Ms Mattinson steered Mrs Thatcher to a couple of famous victories, so maybe there's hope for him yet.
Do not be fooled; 'Wokery' is no joke, its aims are to undermine the very culture and history of a nation. I fear it may be a while before a more sensible Labour Party is seen as electable. I, for one, hope that time comes a.s.a.p.
Personally I'm a very middle-of-the-road Conservative who would like to see a strong Labour opposition. Democracy relies on opposition, and unfortunately the 'Woke Generation' are doing their best to ensure that doesn't happen.