I think of my dear cousin every day of the year (the photo below lives in a prominent position in my sitting room), but especially on this day May 10th; the day on which he was murdered, in 1977. 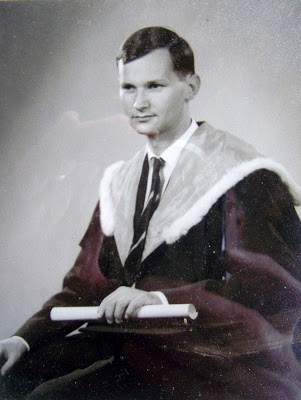 My cousin Stephen was not just a 'doctor'; he was an exceptional one. His diagnostic abilities for 'internal medicine' were second to none.
As a young 'houseman' at Liverpool's Royal University Hospital, he was head-hunted by the Australian Health Service as a 'Flying Doctor'. His possession of a pilot's licence made him highly sought-after.
Regardless, he decided to go to Canada, and it was there where his life sadly came to a sudden end at the hands of some young scumbag next-door neighbour who was looking for drugs (I believe).
He'd been an advisor to the Canadian Government, as well as having his services often sought by the Canadian Mounties. He was a lovely man, and had been a huge asset to society.
He died aged 35, leaving a wife and three young daughters; one of whom witnessed his murder.
He should have had at least another 30 years to offer to the world of medicine. What a terrible waste of a precious life.
RIP Stephen. It pains me, knowing that he's no longer here. xx
Posted by Cro Magnon at 04:30