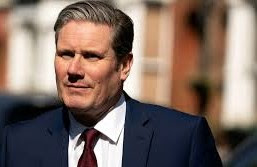 It's been a whole year, now, since Sir Keir 'Brylcreem' Starmer took over from Corbyn as Leader of The UK's Labour Party, supposedly giving them slightly more 'electability' than under wee Jeremy.

But the poor guy, Sir Keir already seems to be stuck in the mire. He's been caught visiting a church with very dubious anti-gay procedures, he's been photographed on one knee in submission to something or other, and he's still refusing to apologise for Corbyn's crazy term in office, and/or Labour's anti-Semitic stance. He doesn't seem to have any policies either; whacky or otherwise.

Not only all this, but in the recent parliamentary, and local council elections, Labour have hit rock-bottom. They've even just lost Hartlepool; a Labour 'jewel in the crown' seat, that hadn't seen a Tory win for half a century. Even up there they're getting the message.

Starmer obviously has sharper skills as a speaker than his predecessor; he is, after all, a reasonably well-honed Barrister. But typical of a Barrister turned Politician, he's continually nit-picking from the past rather than proposing policies for the future. Assembling a case from past events might work in court, but not in parliament, giving him the well-earned sobriquet of 'Captain Hindsight'.

At the weekly Wednesday PMQ's it makes him very easy picking for Boris Johnson's superior debating and political abilities; Sir Keir simply sits there blinking, hoping to hit a nerve, whilst looking confused and downhearted. His recent attempt to tar Boris with accusations of 'sleaze' has only made Boris's popularity increase. He can't win.

His novelty value is now waning, and his popularity has fallen drastically. He was originally seen as a latter day, quasi-Tory, 'son of Blair', but without the dewy-eyed appeal; Sir Keir has a somewhat manic and perplexed look. He is also seen as too weak and too right-wing for the more radical members of both his Parliamentary Party, and the all-powerful Trades Unions.

I can't see him leading Labour into the next general election, unless he changes his 'Blairite' political stance. More radical Labour MP's would desperately like to see a woman leading their party, it might give them more kudos (the Conservatives have had two female PM's, so why don't Labour have a female leader?). I suggest that either the fragrant Jess Phillips, Angela Rayner, or even Rebecca Long-Bailey might well be in line for the job.

Some still talk of Labour as being the party of 'The Working Man', but let me explain something; it's a strong economy those 'working men' need, not Labour. You only get growth and high employment with the Conservatives. Labour have NEVER left a term in office without an increase in unemployment; hardly pro those 'working men'.

One doesn't wish to gloat over Labour's demise, but it's their crazy policies! No-one wants a government that would wreck the economy; like the last time they were in power. Those days are over; it's time to think again.

The Labour Parliamentary Party will need to 'pretend' that they believe in more sensible policies, and maybe even start agreeing with the Tories; only that way will they stand any chance of regaining power.

Michael Foot's election manifesto of 1983 was called 'The longest suicide note in history'..... nothing much has changed.