We don't expect old friends to suddenly appear on TV, but on Sunday night (May 2nd) one did. 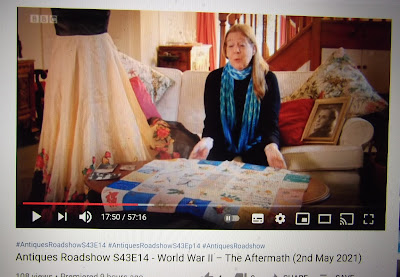 The daughter of our old friends Gray and Tineke appeared on a World War 2 edition of the BBC's Antiques Roadshow, with a few treasured souvenirs from her mother's time in a Japanese prison camp.
Tineke never really spoke about her time as a prisoner. I knew that she'd been in the wrong place at the wrong time, and that she'd been very badly treated, but I never asked for details.
I now learn from the programme, that she'd been in Indonesia with her parents, and that after the fall of Singapore, the Japanese came and took them away. They entered her home whilst they were having dinner, and ordered them to 'pack a bag'. It was as simple as that.
Tineke had just had a new dress made, and refused to leave it behind. She stuffed it into a sleeping bag, and somehow it survived. The other remarkable souvenir is a patchwork made in the camp by her friends as a birthday present. Both are in the photo above. Tineke left the camp weighing 3.5 Stones.
Tineke was a lovely person; and I remember her daughter very well. It was so good to see her again after so many years.
What a wonderful surprise.
Posted by Cro Magnon at 04:19