So, how's Brexit coming along?

They're not laughing now! 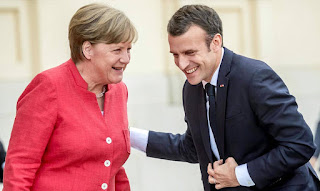 Other than the appalling fiasco over vaccines, and fishing, M Macron and Ms Merkel now have other worries.

Germany's exports to the UK between December '20 and January '21 were down by 30.5%; a loss of £1.7 Billion from their dwindling coffers.

During the same period, French exports to the UK fell by 16%; whilst their imports from the UK rose by 27%. That wouldn't have made Emmanuel very happy!

Macron has now imposed a strict 7 day isolation period for all UK residents who enter France. Whilst back in the UK, France is firmly placed on the 'Amber List' of dodgy countries to visit. If you do somehow manage to get away for a week's holiday to The Riviera, you will have to spend it locked away indoors!

By wishing to punish Great Britain, the tide seems to have turned, and the people who are suffering the most are citizens from the EU's two remaining financial powers; France and Germany.

And, whilst on the subject; whatever happened to those predicted lorry queues at Dover? Here (below) is a picture of the empty 66 acre lorry park in Ashford. It was hurriedly built, and designed to cope with a build-up of 1,700 lorries. It remains unused; I wonder who's paying the electricity bill? 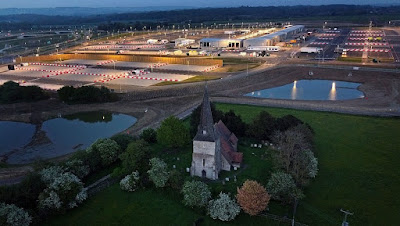 As I said quite recently, a more intelligent EU would have worked WITH the UK, not AGAINST her.