There is no question that Napoleon was an important military leader, but his greatest defeat was at the hands of those very annoying English.
His invasion of Russia ended with almost 600,000 pointless French deaths, and at the Battle of Leipzig he lost another 100,000. His ability to maximise French losses was on a par with his occasional success. 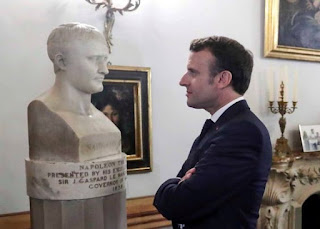 Even following Napoleon's defeat by Wellington, his reputation amongst the French is still far greater than that of Wellington's is with the English. Maybe heroes have different standards on opposite sides of the channel.
The English famously sent Napoleon to St Helena where eventually, in 1821, he died. His body was returned to France some 20 years later, where he is still idolised; especially by 'teacher's pet' Macron. It's not surprising that certain Frenchmen hate the English.
Meanwhile back in the UK, some of our finest military leaders are now being 'cancelled' by the junior-thinking Woke brigade. In France, rather than having his name and images removed, as would have been the case had he been English; Napoleon remains a god. His restoration of Slavery in 1802, which led to the infamous 'Haitian Revolution', would have had the UK's Snowflakes taking to the barricades; but not over here, where not even his support for slavery can besmirch his deity status.
And as for slave owner George Washington, who personally owned 123 slaves, and was an extremely cruel taskmaster. How he has (so far) managed to escape the American BLM's loathing is a total mystery!
N.B. The word 'macron' means long (maybe too long) in time. It is also the name of that little line over a vowel encouraging the reader stretch the sound, as in Māori.
Posted by Cro Magnon at 04:35