It's all in the Name. 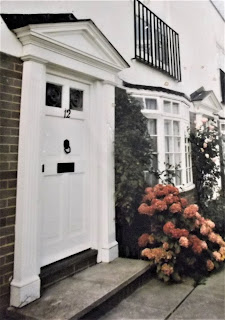 Back in the UK, we are often encouraged to buy Georgian style light switches, Regency style kettles, or Victorian style TV's. Why not a Medieval style Smart-Phone?

I have heard of a Scottish railway Co that boasts a 'Jacobean Steam-Train', and I've even seen an advert for a 'Tudor style' electric door bell; what on earth was that?

Some avoid all this nonsense by referring to 'Heirloom style', or 'English Country style'.

But it does become a little far-fetched when an American home, for sale, was described as 'Queen Anne Tudor style'.

Our own small 1960's Brighton mews type house (above), was, of course, sold as 'Georgian style', simply because they had added a faux-Georgian portico and bay window to the façade. Otherwise there's not a scrap of Georgian about it.

Are the 'Trades Descriptions' chappies not concerned about such things?