I rather like the look of Mr Musk's 'Cybertruck'. It looks as if it's been designed by an Origami buff.
It looks 'home-made', it has a simple aluminium body (I think), and I'd imagined it was pretty cheap to make; by the look of it.
The bodywork looks as if it's been stamped-out in about 4 bits, it has 4 chunky tyres, and appears to be a doddle to manufacture; Chassis, Engine, Wheels, Body; a few bolts and screws, and it's done. 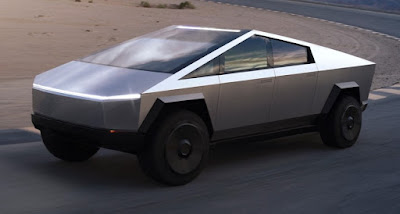 I was interested enough to look online to see if I should buy one.
Firstly it's electric, and I'm not keen. I understand that the cheapest model will run for about 400 Kms before requiring a re-charge; not enough. It will reach 0-60 in 6.5 secs, but that doesn't interest me one iota. And finally it has a top speed of 175Km/h; I rarely go above 80.
Most importantly, I suppose, is the price. There are, of course different models from 'reasonable' to 'not so reasonable'. They start at about $40,000, and rise to $70,000.
I don't think I'll bother, but I still like the look of it..
Posted by Cro Magnon at 04:18