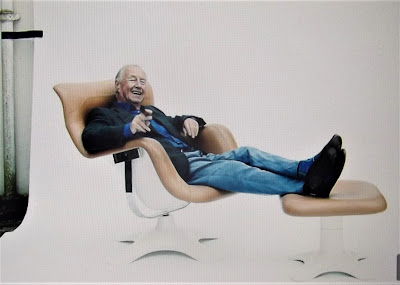 There is no doubt that Sir Terence Conran changed our lives.
His mid-1960's store, Habitat, brought to the High Street things we had only ever previously encountered abroad; mostly in France.
His simple, plain white painted, stores offered us Le Creuset cast iron casserole dishes (mostly orange), large round tissue-paper lampshades, duvets, and even woks. You walked into his stores and literally became enthralled.
His other great love was good food, and he opened over 50 restaurants, from the simple to the gourmet. Whist studying at The Central, his tutor had been sculptor Eduardo Paolozzi who was a passionate foodie, and had introduced him to the pleasures of simple Italian foods which he later tried to emulate in his eateries.
Conran's philosophy was that 'good design makes people's lives better'; and he was right.
So, goodbye Sir Terence; your 88 years were well spent, and you certainly improved mine.
p.s. My small black leather wallet, which I've owned for years, was designed by his son.
Posted by Cro Magnon at 05:30