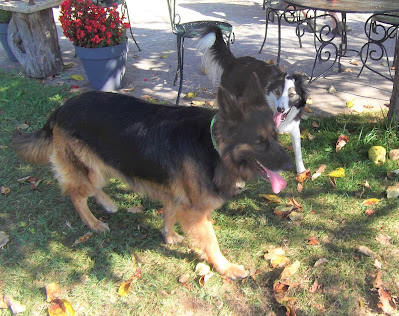 He seems to have a preference for the older woman. Amie is a beautiful, big, dark, German Shepherd. She looks like she'd have your hand off as soon as look at you, but in fact she's a sweetheart.
I'm not sure who's more in love than who, but I do know that Billy adores Amie. Maybe he sees her as a mother figure.
They play together quite regularly, tearing around the garden, and play fighting. In the past it's been the possession of a particular fallen Quince that has amused them the most, but now they've all gone and an old tennis ball has become the prize.
We have one other German Shepherd who visits, but she's getting old and prefers to sit in the shade and watch. His previous friend, Marley (another GS), now stays at home. I think he's been 'discouraged' from his wanderings.
Posted by Cro Magnon at 04:10