It's All In The Name. 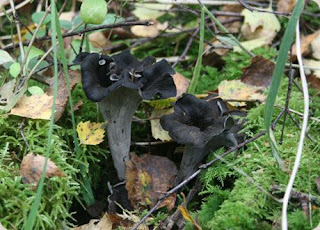 Autumn is, of course, the season of mushrooms. We've already had a glut of Parasols, and now it's the turn of the last of the year's delicacies; the Trumpets of Death, and Rat's Teeth. Both, I'm sure you'll agree, come with delightfully tempting names.
Above, the 'Trompette des Mort' (Horn of Plenty in UK), is rather a bland mushroom. It does however have two redeeming features; once 'up' it stays fresh for quite a long time, and as it's black it can easily be used by the unscrupulous (ahem), to replace Truffles in expensive terrines, patés, etc.. 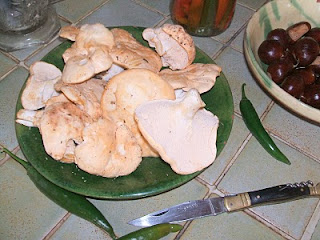 The other mushrooms are 'Dents de Rat' (Rat's Teeth). Again a mushroom that lasts well when 'up', and also grows in long lines; spot just one amongst the leaves, and with a little scraping you'll usually fill your basket.
Called the Hedgehog Mushroom in the UK, this again is rather a bland tasting fungi, but it has the advantage of absorbing whatever flavour it accompanies. Stick them in a chicken casserole, and you'll end up with the impression of having twice the amount of chicken you started with. Can't be bad!
So, it's farewell to mushrooms for a while. We now have to wait until about May for the Girolles to appear; other, of course, than our stock of delicious Cèpes in the freezer.
Posted by Cro Magnon at 05:35