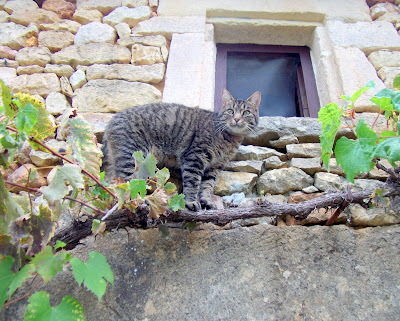 With guests around in recent months, we've been trying to keep Freddie out of the house at nights. He has a penchant for jumping up and down on people's beds during the night, and they find it off-putting.
He has a cat-flap into my studio (where he is fed), and I keep the interconnecting door with the house tightly closed.
So, how has he been getting in at night, and dancing the hokey-cokey on my head at 2 am every morning?
We now have the answer. Somehow he manages to climb up, and along, a grape vine, and squeeze in through an opening he's made in a small window's mosquito netting. We caught him in the act!
I suppose it shows feline guile and initiative, if nothing else..... Little monkey; nice, isn't he!