Paula Rego was of Portuguese origin, but chose to live and work in London. She was without doubt amongst my favourite late 20th C painters.
She died this last week at the age of 87. 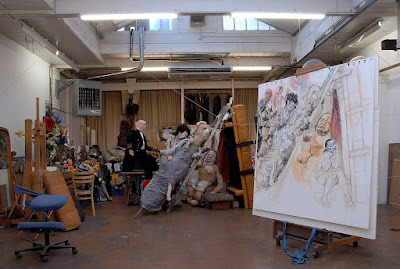 Her work is often described as 'unsettling'. Her use of rather bizarre looking dolls, rather than humans, goes through much of her work. In the studio shot above one can see many of them arranged for painting, and in the works below they all appear again.

She was a good draughtsman, and her style of painting was strong and fluid; almost masculine in many respects . She preferred an expressionist approach rather than anything too realist. It is her subject matter and composition that stands her apart. She was an excellent colourist.
So, farewell Paula. We never met, but I'm sure I would have liked you. You leave the world a far better place thanks to your consistent hard work. Not many of us can claim that.
Posted by Cro Magnon at 04:29