Firstly you need to be a Union Baron with a grudge; usually against an opposing political party and its leader, in order to call a destructive strike. Pretending to be looking after the interests of your members has nothing to do with it whatsoever.
In the early 80's a major strike lost its Union about 200,000 members' jobs. They too pretended that their actions were in defence of their members.
Now in the early 20's, the effect will be spread further afield. To bring a nation's travel to a halt affects more than just those who travel by bus train or plane; it affects everyone in peripheral jobs everywhere.
As they sit atop their high horses in sharp suits, it is very easy for the Union bosses to demand high pay rises for their members, but as everyone knows such an increase in wages causes either unemployment, or a lack of investment in infrastructure or development, or both. Trying to match inflation to wages is always counter-productive. 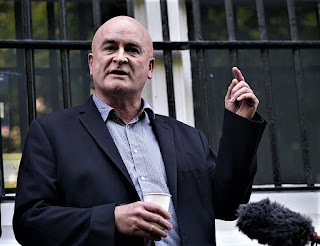 The man above is Mick Lynch, a self pronounced Marxist. He is the leader of the powerful RTM Union. He claims that his Union's current strike is a 'class struggle'.
The banner they are holding (below) explains a lot. Lynch wishes to cut profits.
Well, Mr Lynch, has no-one explained to you that 'profit' is what separates success from failure in business? No profit means no business, no employment, and no service! It doesn't take a lot to understand that; even for an old-style Marxist. To say 'cut profits, not jobs and services' makes no sense whatsoever. 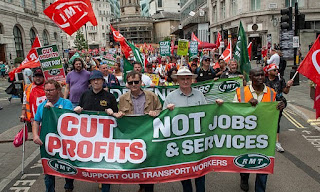 Lynch will be happy to cause as much disruption as possible. He will be happy to see scuffles between the Police and his more unruly acolytes. He will also be happy to see considerable unemployment as a result of his actions which he will then blame on government; as did the joker who lost the 200,000 jobs back in the 80's.
Lynch is well named. If he'd tried this caper in his beloved Soviet Union, they'd have had him hanging from the nearest tree in a flash.
Just be grateful, Mick, that you live in a very liberal, non Marxist-Socialist, country.
Posted by Cro Magnon at 04:34